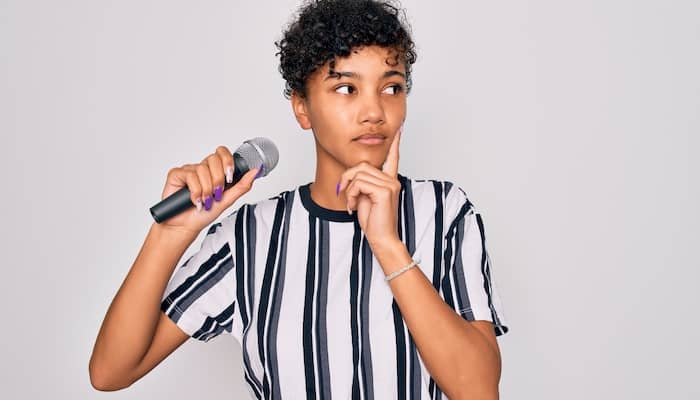 I have to confess: I also want to know “what is mixed voice”, other than something of fairytales and unicorns. But I’m often asked about this phenomenon, so I thought I’d do a group answer here. You’re welcome!

I don’t know how I managed to escape learning about “mixed voice” in my more than a decade of professional voice training since it seems to be such a hot topic. From everything I’ve gathered about it, it seems to be something NO ONE understands, though, so don’t feel alone if you don’t get it either.

An answer I can get behind…

Unlike in contemporary singing, in the classical singing voice, there are two “resonances” that make up the technique: the chest voice (or register) and the head voice (or register). These two registers of the classical voice are also separated by a break (which doesn’t exist in contemporary singing at all). Even though there are two separate places the sound can resonate, there is also a place where they overlap – where a singer has the ability to choose whether to sing in a chest voice or a head voice. I’ve often heard “mixed voice” as the definition of this overlap in the classical voice.

Let’s talk about why this is impossible to do…

You know how on a bicycle – or even in your car – there are different gears you can be in while riding (or driving)? I know if I try to put the little gear shifter on my bike between two different gears, it’s going to do a lot of struggling to figure out which gear I mean for it to be in, since it’s impossible to be in both gears at once. On a car, I know that if you put the shifter between two gears you’re not in either gear, you’re automatically in neutral, because like the bike, the car can’t be in two gears at once.

If you think about the two places your classical voice can resonate – the chest and the head – as two “gears” of your voice, it’s the perfect analogy for why you can’t possibly have your voice in a little bit of one and a little bit of the other all at the same time. The chest and head ARE like gears of your voice; if you are singing classically, you have to make a conscious decision to be in one or the other. It’s the reason the break exists – the break is where the chest voice can’t go any higher so it has to switch into the head voice (okay, shouldn’t – it CAN, it’s just really dangerous).

The chest and head ARE like gears of your voice; if you are singing classically, you have to make a conscious decision to be in one or the other.

This explanation for “what is mixed voice” is more confusing than it is helpful, so I choose to think of it as someone’s misunderstanding of the first possible explanation for “what is mixed voice”. Sadly, this misunderstanding has caught on like wildfire even though I have yet to locate someone who can demonstrate how it’s done.

One of the reasons I’m so frequently asked “what is mixed voice” is that in contemporary singing there is a technique called the mix technique. NOT “mixed”, but “mix”. Sometimes singers don’t know which they are asking about – this mysterious “mixed voice”, or the “mix technique”.

The belt technique sounds louder and fuller (comparable to a chest voice) but because there are no breaks in this technique, the belt can go much higher than a chest voice. The mix technique has the same range as the belt and usually some extra notes up high as well. Much like belt, mix’s neutral (lowered) soft palate allows it to go very high and very low without any breaks at all. Comparable to the head voice, the mix technique produces a lighter, less brassy sound than the belt technique.

The vowels of belt & mix feel a lot more like the vowels we speak in, causing the lyrics that are sung to be much easier to understand. In classical technique, whether in a head voice or a chest voice, the raised soft palate causes the vowels to sound distorted, making lyrics much more difficult to understand.

I think of the mix technique producing a sound comparable to a Disney princess or a member of a boy band. It can also be used to convey vulnerability or softness. It can even be dressed up to sound similar to a classical head voice, only with more “familiar” sounding vowels. And it can be disguised as your belt to allow you to sing really high notes much prettier than if you were belting them. Cool, huh?

If you’re interested in knowing how to utilize the very versatile, cool, and totally healthy contemporary mix technique, you’re in luck because I have the resource for you.

In my international bestselling book, Never Lose Your Voice Again: The SECRET To Unlimited Vocal Health™ for Singers, Actors, and Speakers, I teach you exactly how to sing in the belt and mix techniques. Download a free chapter below!