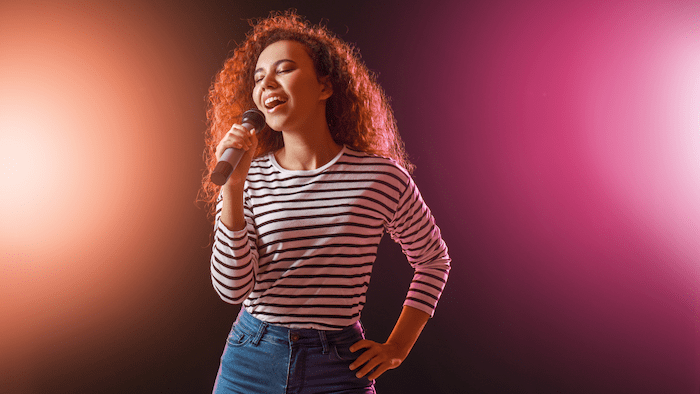 I often hear singers misunderstand what vocal health is and what it isn’t. There are many myths and lies out there that the singing industry perpetuates.

Today, we’ll dive into some common assumptions singers have about vocal health. I’ll also share what you can do about it.

If you’re more of a visual learner, check out the video below!

First, I want to tell you about Mikko. Mikko is my client and the 2018 Karaoke World Champion.

He came to me before his big win because he wanted to book more wedding gigs. And he wasn’t able to because he couldn’t sing past hour two without feeling fatigue. Or without suffering major consequences the next day. He would often lose his voice, feel raw vocal cords, or feel like he couldn’t sing anything at all.

After two weeks in that five-week case study, Mikko learned how to stop losing his voice for good.

He learned what he was doing wrong, and how to fix it.

His producer shared with me that the work we did allowed Mikko to be able to sing for eight hours every day in the studio without vocal fatigue or voice loss, something he’d never before seen.

That is the kind of work that I do with my clients every day. And I’ve been doing it for over two decades. This is just one example of many.

Vocal Health Does Not Compromise Your Singing

I often hear singers say that if you focus on vocal health, you’re going to compromise your singing style. They believe that practicing vocal health will make them sound “too trained” or “too perfect.”

Singers often have this concern because they think style elements like growls, screams, or loudness, are bad for their voices.

Those style elements are only a problem when you do them without any guidance on how to do them in a healthy way. When you growl, scream, or sing loud in a healthy way, you sound just as cool as if you were doing them in an unhealthy way.

In my two decades of coaching singers, I’ve found that when you prioritize vocal health, you’re able to do so much more with your voice.

Vocal Health Does Not Mean Singing In Your Head Voice

Here’s a common myth I hear singers believing. They believe that practicing vocal health means singing in your head voice.

Many singers I’ve talked to think that singers who don’t lose their voices don’t sound like they want to sound.

And these singers don’t want to sound like those singers.

But when you learn Unlimited Vocal Health™, you realize that:

Are you shocked to hear that?

The reason you might have believed this myth is that many singers perpetuate it.

Vocal Health Does Not Mean Limiting What You Can Sing

Many singers believe that taking care of your voice means limiting what songs you can sing and the way you sing them. So they deal with the consequences of voice loss and vocal fatigue.

So singers associate being healthy with feeling restricted.

But vocal health actually increases what your voice is capable of doing.

Vocal health gives you the ability to sing higher, longer, and louder.

It gives you the ability to sing more difficult music.

The number one benefit my clients report after learning Unlimited Vocal Health™ is that an entire library of songs opens up to them. They’re able to sing bucket list songs— songs they never thought they could sing before.

Which means that practicing vocal health the right way, actually removes restriction. It doesn’t create restrictions. It gives you the ability to do more, not less.

Ready To Sing Without Limits?

If you’re ready to…

Stop feeling restricted in your singing…

Amplify how cool you sound…

Then check out my free training on The Secret to Never Losing Your Voice Again.

This free training is jam-packed with helpful information and tips to get you started on your vocal health journey.

You’ll get a quick check-in to see what vocal health lies and myths you’ve been believing.

You’ll learn the top three myths (different from the ones I shared with you in this post) about singing, and how they relate to vocal health.

You’ll learn why the singing industry is perpetuating these myths and lies.

Then you’ll learn what to do about it.

There’s so much misunderstanding about vocal health in the singing industry. I want you to stop believing the lies. Stop buying into those myths and get started on your path toward never losing your voice again.