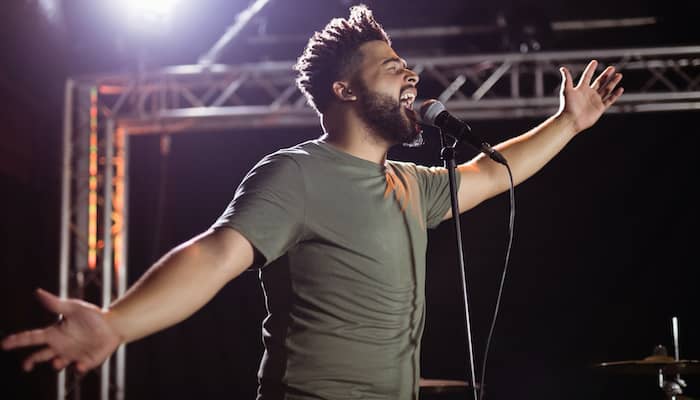 There’s a lot of misinformation out in the singing industry which is spreading like wildfire. It’s not that there are malicious instructors out there trying to damage as many singers’ voices as possible. Instead, these instructors are naively using the only information they have which happens to be incorrect.

To be clear, the information these instructors are sharing is mostly correct as long as the singers are singing classical music. If these inquiring singers are asking how to sing with more power on the songs they blast by their favorite recording artists, however, this is where that information couldn’t be more wrong.

Side Effects of Singing the Wrong Way vs. the Right Way

If we take a look at what happens when a singer learns how to sing with more power the wrong way, the most common side effects are that the singer will feel pain in her throat that could last for several days. This wrong way of singing with more power may sound booming and strong, but it leaves the singer feeling vocally fatigued or even totally without a voice. Repeating this pattern can lead to serious vocal damage.

Also, singers who learn how to sing with more power the wrong way will have little to no endurance in their performances. Many of the singers we know and love can’t get through a 90-minute concert with their full voices because they’ve learned how to sing with more power incorrectly. As a result, they often will start showing signs of vocal fatigue in the middle of their second song.

Not only that, but they suffer zero consequences for this powerful singing. There’s no vocal fatigue, no pain in the throat, and no voice loss. Unlike singers doing it the wrong way, these singers can sing as loudly and as powerfully as they want for hours and hours.

That’s a pretty huge difference, isn’t it? Let’s take a look at a real-live example of this from one of my past clients.

Mikko Blaze fronts a band in Minneapolis, MN and is involved in a variety of singing competitions and burlesque shows. He has an unbelievable amount of talent, but he was having some vocal health struggles he couldn’t figure out on his own. When he came to me, his band was wanting to book wedding gigs which required them to play a minimum of 3-hour sets. Mikko couldn’t get through 2 hours without feeling serious fatigue and was frustrated that his band couldn’t book these gigs because of his own limitation.

I discovered right away when we started working together that he was missing some of the key components to being able to sing with more power and have the endurance he was desiring. After just a few sessions together, he not only was able to start booking wedding gigs, but he also was able to up his game for his singing competitions, singing songs with more power that he previously wasn’t able to even attempt. For the first time ever, he won his first national singing competition which advanced him to the international level which he also won.

After becoming the 2018 KWC World Champion, Mikko went to the studio to record his first album. His studio producer asked for my contact information so he could thank me. He’d never before worked with a singer who could sing for 8 hours a day, 7 days a week in his full voice without feeling pain or fatigue.

How to Sing With More Power the Right Way

In my patent-pending vocal method, Unlimited Vocal Health™, which I have used with singers for more than 2 decades, there are 3 primary steps to being able to achieve results like Mikko’s, including how to sing with more power. They are:

A solid foundation (in the first step, Vocal Core Power) is created from the combination of taking a low breath, supporting the sound, and connecting the breath to the tone. When those three things are working together correctly, you have a solid foundation that will support you whether you are singing classical music or contemporary music.

Once you know the correct placement you are able to match it up with the appropriate style of singing. Once you are correctly matching your placement to the style, you will be able to sing with more power while eliminating the pain and fatigue.

Properly shaping the sound (in the third step, High-Powered High Notes) goes hand in hand with finding the correct placement. High notes are capable of having extreme power when they are placed and shaped correctly. Just like with placement, the proper shape of your sound depends on the placement you are using, which depends on the type of music you are singing.

Once you have all 3 of these components working properly, singing with more power is not only easy, it’s a side effect of fantastic technique. Also, as a an added side bonus, you’ll have unlocked the SECRET to never losing your voice again.