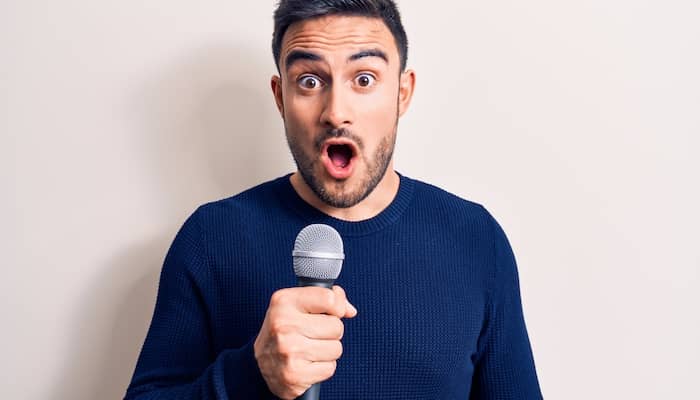 Singers that haven’t spent much time in my corner of the singing world often ask me how to mix chest and head voice. It’s a very common question, so it’s understandable they’d want to know the answer. While this is one of my favorite topics, my answer is not what these singers expect me to say.

Before we delve into my unexpected answer, let’s get clear on what the chest and head voices ARE, so we’re all on the same page.

The Chest and Head Voice Explained

The chest and head voice are terms used to describe where the sound resonates in the body when the singer is utilizing the classical singing technique.

The classical singing technique is characterized by having a raised soft palate in the back – like a yawn – which blocks off the passageway into the nose so that no sound can come out there. With the nasal passageway blocked off, the sound either resonates in the chest cavity or in the sinus cavity of the head, which is how the chest and head voice got their names.

The chest voice is a deeper, stronger sounding voice that can only go so high before having to “switch” into the head voice, which happens by passing through a break, or “passaggio” in the voice.

In classical singing technique, there is a term called “the mixed voice” and, though I don’t teach it (I teach the contemporary technique “mix” which is not the same thing at all), I’ve heard two definitions for what it is. One of the definitions is that the mixed voice is that place where the singer can make the choice to sing either in a chest voice or a head voice because of the place where they overlap. The other definition is much more mystifying to me. It claims that the mixed voice is what happens when a singer is able to mix the chest and head voice.

When I was a kid, I had a 10-speed bike which I adored. I hated pink as a kid but loved purple. My parents tried to find me a purple 10-speed, but in the 80s, things for girls – even if they had some purple in them – always had pink, too. So, my 10-speed bike was purple and Barbie-pink. ANYWAY…With my 10-speed bike, there was a little shifter that would let my bike shift to all the different gears. One thing I learned very early on with my bike was that if I didn’t shift the gear all the way to the next speed, my bike was pretty non-functional. It wasn’t possible, for example, for me to be in 5th speed AND 6th speed at the same time. Instead, I was in some sort of limbo-land where my bike jerked and threatened to just stop altogether.

Do you see where I’m going?

Just like with my 10-speed bike that couldn’t be in two gears at the same time, your voice can’t be in two resonances at the same time. In other words, it’s not possible to mix chest and head voice. The break in the classical singing voice is like the gear shift on my bike – it facilitates going from one resonance (chest) into the other (head). Because the chest can’t go as high as the head voice, it has to pass through the break and into the head voice in order to keep singing higher.

CORRECTION: it IS possible to stretch the chest voice higher than the natural break, but doing so causes damage to the vocal cords.

Also, ALL OF THIS ONLY APPLIES TO THE CLASSICAL TECHNIQUE. So, if you are a contemporary singer, you won’t want to be singing with a chest voice or a head voice because of the limitations I’ve described here.

Instead of attempting something impossible (to mix chest and head voice), I recommend learning the two contemporary techniques of belt and mix. Belt will give your voice the flexibility to sing with the strength and power of the chest voice, only there isn’t a break so you have no limitation on how high you can sing.

Mix will give your voice the flexibility to sing with the delicate nature of the head voice, only without the stuffiness of a raised soft palate. Mix also has the ability to sound as strong as the belt, giving you the ability to sing higher notes powerfully but with much greater ease.

If you want to learn more about how to do this in your singing, check out my international bestselling book, Never Lose Your Voice Again: The SECRET To Unlimited Vocal Health™ for Singers, Actors, and Speakers, which teaches you how sing in a healthy and limitless way. Download a free chapter below!