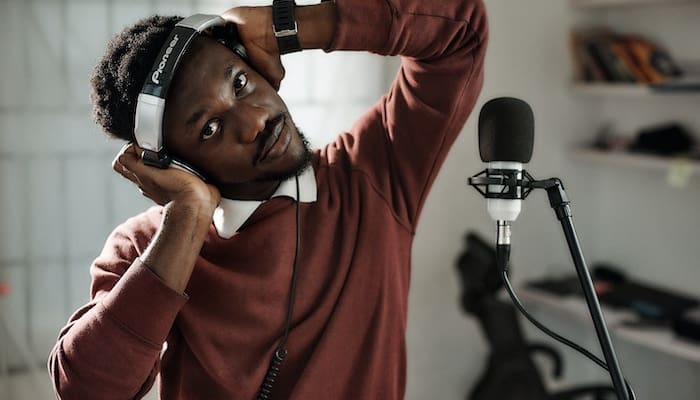 Let’s talk about the great debate of head voice vs falsetto. What’s the difference, you ask? Based on all the talk I hear online and on TV, I’m guessing my answer might surprise you.

The short answer: there is technically no difference. Kinda. Keep reading for the long answer.

Like most things in life (sadly), when singing got its early start in the world, it was a male-dominated art and profession. Acting, too, as a matter of fact. Eunuchs and young boys whose voices hadn’t yet changed often played female roles both in plays and in song.

Head Voice vs Falsetto – What Is Falsetto?

The term “falsetto” means “artificial voice” and comes from the Italian word “falso” which means “false”. It was believed at the time that females were the only ones who could speak or sing in this kind of high, airy, head voice sound. So, when a male with a fully changed voice was able to sing in a head voice, it was considered an “artificial voice” because he didn’t sound “like a man”. So, “falsetto” is really the same thing as the head voice, except that it refers specifically to when a man is singing in a head voice, because of an outdated belief system.

Head Voice vs Falsetto – What is Head Voice?

In a head voice (male or female), the soft palate is lifted and the sound is resonating in the sinus cavities (which is only possible because when the soft palate lifts, it blocks off the nasal passageway so no sound can escape through the nose).

Falsetto, as we said, is the term created years ago for when a male sings in a head voice and “artificially” sounds more like a female. Yet I’ve had (on many more than one occasion) female clients report back to me that a judge or director made comments about her falsetto and it just makes me laugh because falsetto is a term describing a male voice.

And here’s the big kicker: if you are singing contemporary songs (the correct way), it’s highly unlikely that you’re ever going to sing in your head voice (OR a falsetto), because, as we discussed earlier, a head voice is part of the classical technique. The head voice is created with a raised soft palate and causes the sound to resonate in the sinus cavities, which is totally the opposite of what we do in contemporary singing technique. Since falsetto is just a term originally created to define a male singing in a head voice, the same truth applies, since a falsetto is created the same way as a head voice (because they are one in the same… sort of).

What is Mix, Then?

It is quite common for the contemporary technique known as “mix” to be falsely labeled as the head voice (or even as falsetto), so let’s talk about what mix is since I think this is where a lot of confusion lies.

With a mix (and a belt, too), it’s just the opposite of all of that: the soft palate is NOT raised, the nasal passageway is NOT blocked off, and the sound is NOT resonating in the sinus cavities. The sound is similar – well… similar-ISH. The difference is blatant to my trained ear, but if you don’t know the difference, it can be easy to think they are the same thing. But it’s similar in that both have the ability to sound very light, compared to a chest voice (classical technique) or a belt voice (contemporary technique), which are both big and booming.

Because of this similar lightness in sound (and the lack of understanding of healthy contemporary singing techniques in this industry), a contemporary singer is often given feedback about their head voice (or their falsetto), when they are actually singing in a mix.

Are you unsure whether you are singing in a head voice or a mix? I’d love to help you clear it up. Visit www.judgemysinging.com to submit a sample of your singing for my feedback.