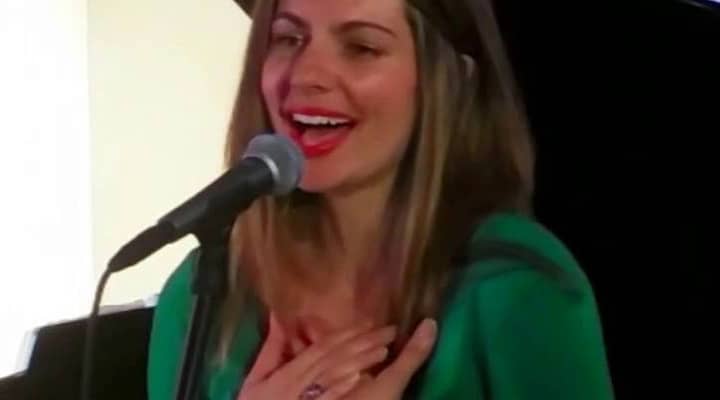 For the first Case Study, we have Jenn, an amazing singer who found her belt and more with my help and her work.

ME:  So, Jenn:  I’m really thankful that you have agreed to let our lessons be made available to the public. I have a few questions for you so I can help our viewers know a little more about you and what we’re working on.

JENN: Sounds great. Let’s do this!

ME:  First of all, I’ve known you a really long time and I’d love for you to share a little about how we met and then what prompted you to reach out to me about getting coaching.

JENN: Oh my, yes we met during the millennium change when the world was rife with fear that everything would zero out and we’d all explode or something. Thank God you and I were performing on a cruise ship in Tahiti, the very last inhabitable place on earth to change from 1999-2000.  You gave me my first lesson on belting and I remember thinking how good you were. I don’t think you had started teaching at that point. Flash forward 12 years later and I had just been cast as Maureen in Rent and was scared out of my mind, for I had never belted again since that lesson with you over a decade before. How I got cast was pure personality and chutzpah, but I had to scream my face off and had no idea where to start. I called you asking if you knew any teachers in the Dallas area where I was living and you said you’d teach me online!

ME:  Yes! I love this story. We definitely had a good time on that ship in Tahiti! Can you also tell us also a little bit about your background – about Jenn before we met?

JENN: I grew up competing in classical singing but I loved acting way more. I went to musical theatre at NYU and was by nature a pretty conservative girl, so ingenue roles were all I ever considered or went out for.  Then time went by and as I aged and got a little less conservative, my personality just didn’t fit those kinds of roles anymore and I started being seen as someone who needed to know how to sing a wider range of musical theatre music. I then hooked up with a cover band that lost their lead female singer and, all of a sudden, I was singing rock too.

ME:  Very cool and also similar to many of my students. And what are you working on right now?

JENN:  I just finished writing a one-woman show! It’s part original content with popular music woven in between. It’s on marriage and adultery. Sorry. That got heavy quick.

ME:  Ha! That’s okay – heavy is totally okay, and it’s probably going to continue that way a bit as we work together. Speaking of which, what kinds of things can our viewers expect to see you getting out of our time together?

JENN: They’re going to see someone very open and very comfortable with you. Who trusts you because we have a history but also because, from the get-go, I recognized you knew what you were doing. They’re going to see me working on songs for my show that range from legit to rock. They’re also going to see you work with me not just vocally, but from an acting point of view AND also from a director point of view. That’s the thing that’s so wonderful about you, that you work with the whole package. Not just singing. Not just song selection. Not just acting. Not just what to wear and how to present yourself. You do it all. You know so much. May I also plug you for a second because I know you’ll never ask me this, but I do want to say that the reason I think you are so incredibly good at what you do is that you are holistic about singing. I don’t know one teacher on the planet (and I’ve been singing for a long time and met many teachers) who teaches the range of singing that you do. Most teachers roll their eyes at other types of singing. Most classical teachers think rock singing is harmful and most musical theatre teachers think classical is boring, and most rock teachers think musical theatre is dumb. But you embrace and love all types and not only sing them yourself but know how to teach them. That’s the other thing – you’re a brilliant singer who teaches, not because she couldn’t get cast and resorted to teaching, but because you prefer it to performing. That’s a huge bonus. I’ve been with teachers who continue to perform professionally and sometimes there’s a little bit of an ego or competition involved. You don’t have that, and it’s refreshing.

ME:  Wow, Jenn. Thanks! And thanks for the plug. I’ll take it! I’m looking forward to digging into this. Do you have any questions for me before we begin or is there anything else you’d like to share with our viewers before we start?

ME:  There you have it! I’ll be posting recordings of our sessions together twice a month. Be sure to subscribe so you won’t miss any episodes of Jenn achieving her goals. Also, stay tuned because I’ll be sharing info about her show and where you can see it.